Album Review: Ever Since the World Ended from Lauren White 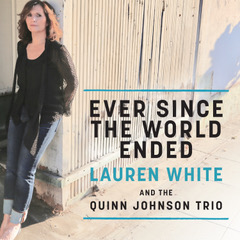 Album:  Ever Since the World Ended Artist:  Lauren White Label:  Café Pacific Records Website:  www.laurenwhitejazz.com A torchbearer of cabaret jazz, vocalist Lauren White's contribution to the genre is embraceable.  Her fifth CD, Ever Since the World Ended features a collection of cover tunes and originals, finely groomed to a melodic sheen.  From the smooth jazz cruising of the title track to the swing jazz-influenced shimmies of "Take Love Easy," White moves through a series of vignettes, each presenting listeners with a sonically picturesque setting.   Like a favorite pillow, White's performance is comforting, offering solace and warmth.  The lingering tone in her voicing through "Alone Together" is supported by the bubbling doodles of Quinn Johnson's keys.  Switching to a light-hearted scamper along "Just the Two of Us," White's optimism is infectious, wrapping the listener in her perky timbres.  The soft flutter of Grant Geissman
Post a Comment
Read more 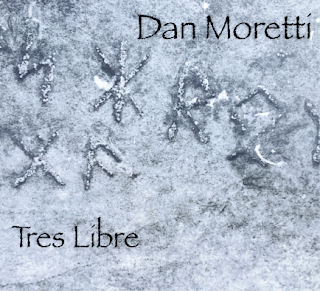 Album: Tres Libre Artist: Dan Moretti Label: Roots Grooves Records Website:  danmoretti.com Keyboardist, saxophonist, composer, and leader Dan Moretti unveils his twentieth recording Tres Libre with all original compositions written by Moretti.  His fusion of jazz, funk, blues, and soul make for a multi-faceted excursion for the aural senses. From the percolating grooves of "Mumbo Jumbo" to the smooth rippling wails of Moretti's tenor sax on "The Inner Side" and into the jittery palpitations of Marcus Santos's pandeiro playing along “Pandeiro-Funk,” Moretti offers a diverse range of musical expressions with Bruce Bartlett's guitar chords adding tingling accents along the melodic bed.  The soulful sonorous of Moretti's saxophone engulfs audiences in familiar terrain, intimating a vulnerability that resonates with listeners. Traversing into a Latin-infused soundscape, the tribal beats of "Escrito Jazz Libre” intergrate the driving congas of Cuban
Post a Comment
Read more 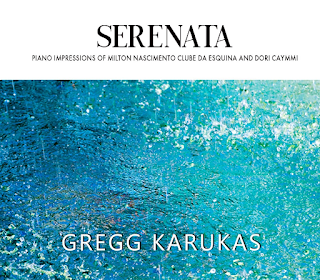 Album:  Serenata Artist:  Gregg Karukas Label:  Nightowl Records Website:  www.karukas.com Pianist Gregg Karukas presents romantic impressions of classic songs from iconic Brazilian artists Milton Nascimento and Dori Caymmi as well as new and reimagined originals penned by him on his 13th CD Serenata .  His elegant musings on the keys are dreamy, twining introspective meanderings, flowing in an eloquent phrasing.  Deeply emotional, Karukas's playing is penetrative, luring the listener with a passionate voicing resonating from the keys.  Track after track, Karukas's thoughts and feelings are palpable.  The lift in his keys along "Tudo O Que Você Podia Ser" puts a spring in his doodles that injects a sense of urgency with a stream of rumbling notes that loosens to a ruminating glide through "Better Days."  The reflective mood of "Clube da Esquina No. 2" traverses through picturesque vignettes like a storybook or a photo album relaying a monumental ti
Post a Comment
Read more 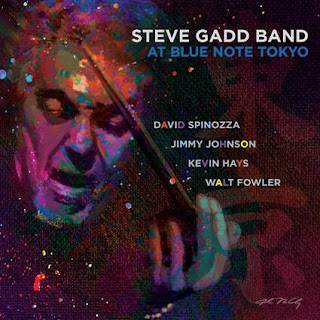 Album:  At Blue Note Tokyo Artist:  Steve Gadd Band Label:  BFM Jazz Website:  https://www.drstevegadd.com https://www.bfmjazz.com A prolific and legendary drummer, Steve Gadd got his start playing in a military band when he joined the US Army in the late 1960's.  After serving a 3-year term of duty, he returned to the States to pursue his livelihood as a professional drummer.  He has worked with Chick Corea, James Taylor, Paul Simon, Eric Clapton, Steely Dan, Joe Cocker, and numerous other leading recording artists.  He grabbed hold of the reins, leading the Steve Gadd Band whose debut release is their live outing At Blue Note Tokyo , featuring a crossover breed of modern jazz, adult pop, funky bluesy, and easy listening rock. Joining Gadd are Jimmy Johnson on bass guitar, Walt Fowler on trumpet, Kevin Hays on keyboards, and David Spinozza on guitar.  The jazz quintet express an open mind about the fusion of jazz, pop/rock, and blues, forming sonic creations that have a perennial
Post a Comment
Read more 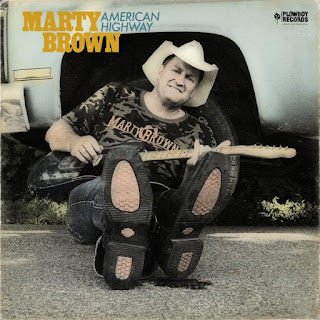 Album:  American Highway Artist:  Marty Brown Label:  Plowboy Records Websites:  https://music.apple.com/us/album/american-highway/1453761002 https://www.amazon.com/American-Highway-MARTY-BROWN/dp/B07PGX7KYK/ref=sr_1_1?dchild=1&keywords=marty+brown&qid=1614824878&sr=8-1 A mixture of Heartland roots rock, country western blues, prairieland folk, rockabilly, and gospel, singer-songwriter Marty Brown has all the ingredients to make music that listeners will take with them on the go.  He does so on his latest release American Highway , which is aptly titled describing the music folks hear while driving along the highways through America.    After experiencing a stint as a songwriter and producer for the likes of Tracy Byrd, Trace Adkins, and Brooks & Dunn, Brown worked with a co-pilot, Jon Tiven, who contributed to nine of the 10 tracks on the recording.  Brown revives country western soul in a way that music connoisseurs can embrace.  His music is not merely a homage to th
Post a Comment
Read more

Album Review: Out On The Coast from David Angel 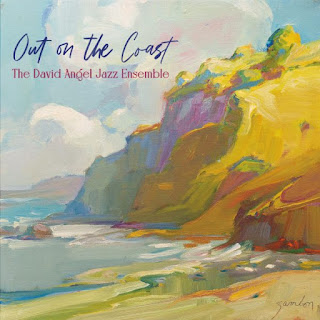 Album:  Out On The Coast Artist:  David Angel Label:  Basset Hound Music Website:  http://www.bassethoundmusic.com Saxophonist David Angel leads a 13-piece jazz ensemble on the 3-disc set Out on the Coast, containing 15 of his original compositions alongside 7 jazz standards.  The recording is a window into West Coast cool jazz infused with factions of swing, big band, Latin jazz, and ballroom waltz. The title track opener is an early Angel composition with a ballroom swing component that exudes harmonic sophistication.  The band transitions into the rhumba-esque sway of "Wig," mounted in layers of chiffon-like silhouettes from the assortment of reeds and brass instruments, waving and undulating in a graceful fluidity.  The slow burn wafting from the toots of the horns through "L'ilo Vasche" displays the ensemble's fluency in smooth swing, culminating into the band's remake of Duke Ellington's silky ballad "Prelude To A Kiss" pervading a dr
Post a Comment
Read more

Album Review: For the Record from the Vinnie Riccitelli Octet 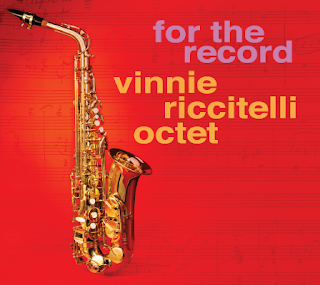 Album:  For the Record Artist:  Vinnie Riccitelli Octet Label:  Self-Released Websites:  https://www.discogs.com/artist/2295583-Vinnie-Riccitelli http://home.nestor.minsk.by/jazz/news/2021/02/0202.html https://karionpresskits.com/reviews/exclusive-magazine-reviews-vinnie-riccitelli-octet-with-his-new-album-for-the-record/ Straight-ahead jazz through the ages is portrayed on For the Record from the Vinnie Riccitelli Octet.  From the swinging grooves of the 1950's to the big band influenced-harmonies of the 1970's and the personalized solos descriptive of jazz in the new millennium, Riccitelli's acuity to remain connected to modern jazz is strong even at the tender age of 94 years old.  A handful of original scores by Riccitelli are interspersed with an assortment of jazz standards, moving seamlessly through the recording. Heady saxophone solos, improvised drum rolls, and bopping bass vamps are signature themes throughout the recording, shedding light on characteristics that
Post a Comment
Read more
More posts