Album Review: The Brite Side from Horizons Jazz Orchestra

Merriment galore, Horizons Jazz Orchestra's latest release The Brite Side is a celebration of the works of Lee Harris,  a revered baritone saxophonist, composer, arranger, and bandleader.  The orchestra's re-imagination of five originals by Harris and his arrangements of five jazz standards give audiences insight into the magnificence Harris brought out in musicians using the big band format.   Brimming with bright, flashy horns, the recording embraces swing and ballroom jazz in a way that is both nostalgic and contemporary. 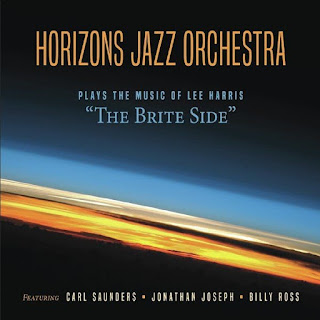 From the first track, the recording puts listeners in an upbeat mood with the flashing horns blazing through 'Red Apple Sweet" to the shuffling drumbeats coruscating "After You've Gone, Finally."  The musicians show a love of life that is palpable.  The creamy texture of the horns splayed across "The Runner" is dotted in electrifying squiggles, weaving extemporaneous flickers that emit thrilling sensations.  The music is a genuine crowd pleaser.  Moving on, the sensual patterns of the horns slinking along "The Sound" emit magnetic pulses that simmer down further to the smooth jazz smoulder of "Summertime," trimmed in sprigs of swaying Latin accents.

The rapping drum strokes lining "Fourth Dimension" are punctuated by plumes of horns that glisten and soar.  The big band flare may seem like retro ballroom jazz  but sparked with a modern glint in their bursts.  The lush quills of the horns embroider crests and valleys along the title track as keyboardist George Mazzeo fill in the space across the recesses with glittering flakes. The adventurous surges and wanes along the track give the composition dynamic shifts that make it substantive, organic and sophisticated.

Horizons Jazz Orchestra's brand of big band music can be enjoyed by listeners outside of the jazz spectrum and by big band audiences alike.  Embracing both adventurous excursions and traditional motifs, HJO's recording updates the big band style to modern listener's liking with ardent and sophisticated performances by the musicians. 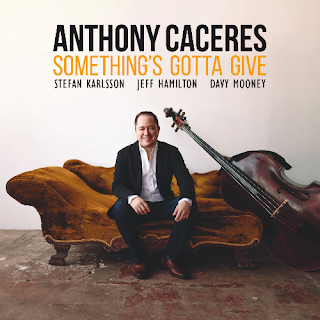 Album:  Something's Gotta Give Artist:  Anthony Caceres Label:  A Jig in G Production Website:  www.anthonycaceres.com The swinging style of singer, songwriter, and bass player Anthony Caceres is like no one before.  Not Sinatra, not Harry Connick Jr., not Michael Feinstein, not Michael Buble though many of the songs on Caceres's CD Something's Gotta Give mirror his predecessors setlist.  With jazz standards like Dizzy Gillespie's "A Night in Tunisia" and Cole Porter's "What Is This Thing Called Love," and long forgotten pop favorites like "Autumn Serenade" and "Once in Awhile," Caceres reprises the music of a begone day when swing reigned as the supreme choice of music.  Extraordinarily, these begone tunes bode nicely with Caceres' register and modern treatment of the melodies. Hearing the bass parts of these songs played by Caceres and the vocals sung by him is a pleasing ride as he shares a new vision for them.  H
Read more 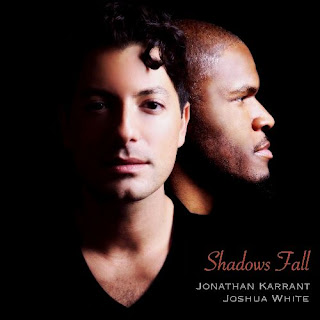 Album:  Shadows Fall Artist:  Jonathan Karrant & Joshua White Label: JKR Website:  www.jonathankarrant.com The duet of vocalist Jonathan Karrant and pianist Joshua White come together on Shadows Fall.  Their collaboration seeps into the listeners skin, holding them in rapt attention as the program moves through a medley of jazz standards and classic pop tunes..  Karrant's vocals sink deep into the listener's soul as White's easy-riding saunter cushions the melodies in glimmering embers.  The collection has a timeless quality, sure to be relevant through the ages. Karrant's personalized delivery along "Being Me," one of Abbey Lincoln's signature pieces, is striking, accentuating poignant words and lodging meaningful inflections along the phrasing.  Karrant's and White's melodic sensibilities are genuinely in sync, honing a repartee that is magnetic and appealing.  Karrant parlays Holly Knight and Mike Chapman's song "Simply the Best,&qu
Read more 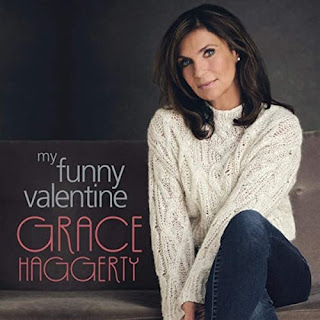 Album:  My Funny Valentine Artist:  Grace Haggerty Label:  Self-Released Website:  www.gracehaggerty.com My Funny Valentine , the new solo offering from vocalist Grace Haggerty, is pristinely put together.  An assortment of jazz standards from the perky swinging thrusts of Cole Porter's "You'd Be So Nice To Come Home To" to the Brazilian smoothness of Antonio Carlos Jobim's "Quiet Nights, Quiet Stars," Haggerty whisks listeners along a pleasing voyage that elevates the senses and stirs elation. The repetitive tossing motion of Mauro Refosco's percussion contours Haggerty's vocals in a soft kindle along "You Go To My Head," giving the track a cocktail shaker trope.  Artfully, "Quiet Nights, Quiet Stars" is seasoned in Calpyso-hued flickers as Angelo DiPippo's accordion moves in and out of the track with whirling figures that stimulates the listener's pulse.   Endowed with a whispery vocalese reminiscent of Judy Collins,
Read more